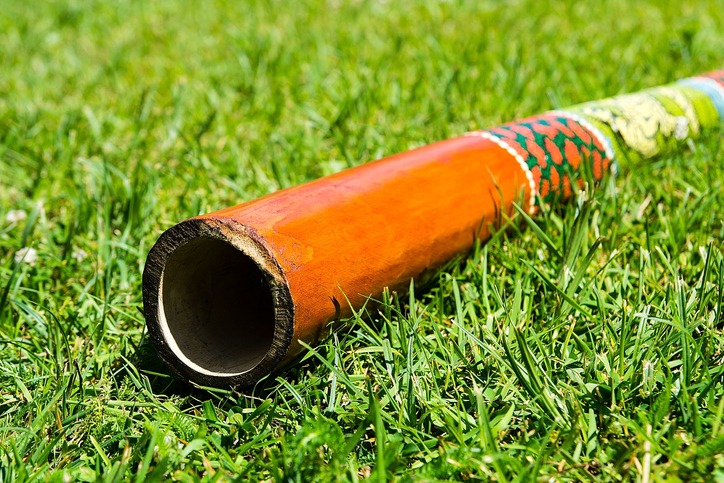 The traditional music of the Aboriginal Australians holds a lot of meaning to their culture and way of life. Music, as well as song and dance, played and still play a very important part of Aboriginal life and customs.

Australian Aboriginal music is essentially vocal music and involves the use of bodily movements for the rhythm, e.g., clapping hands and lap or thigh slapping to accompany vocal chants. But people from these indigenous groups also play a handful of instruments. The best-known of all these instruments is the didgeridoo.

The didgeridoo is usually conical or cylindrical, and can measure from one to three meters (or three to 10 feet) long. Most didgeridoos used today measure around four feet long. Generally, the longer the didgeridoo, the lower the pitch or key it produces. But flared didgeridoos produce a higher pitch than unflared types.

The didgeridoo (also spelled didjeridu, among other variants – see table below) is classified as either a wind or brass instrument thought to have originated from Arnhem Land, Northern Territory. When the didgeridoo was invented remains unclear. However, archaeological evidence suggests that the inhabitants of the Kakadu region in northern Australia have been playing these instruments for less than a thousand years ago, based on the dating of cave art paintings. One of the rock paintings – thought to have been created around 1,500 years ago – shows a didgeridoo player and two singing men performing a ritual. These archaeological findings point out that the didgeridoo is possibly the world’s oldest musical instrument. 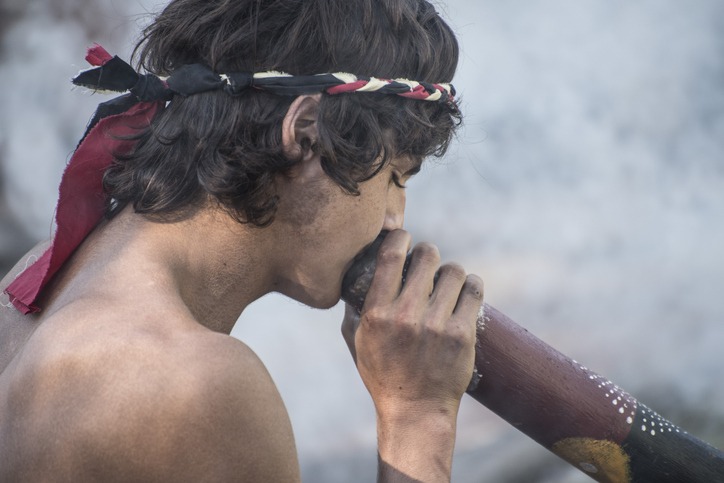 Discovery by the white man

Narrative of a Voyage around the World, written by 19th-century English-born Australian surgeon and explorer Thomas Braidwood Wilson, features an artistic illustration of an Aboriginal man playing the instrument.

English paleontologist Robert Etheridge, Junior, while on a visit in northern Australia, also observed the use of “three very curious trumpets” made of bamboo. At the time, there were two species of native bamboo growing along the Adelaide River in the Northern Territory.

Adolphus Peter “A. P.” Elkin, a Welsh-born Australian clergyman and anthropologist, encountered the didgeridoo in 1938. He described the instrument as being “only known in the eastern Kimberly (a northern region in Western Australia) and the northern third of the Northern Territory.”

There is little evidence of the didgeridoo being played as far south as the Alice Springs region, but traditionally it has never been used in the southern three-quarters of the country. 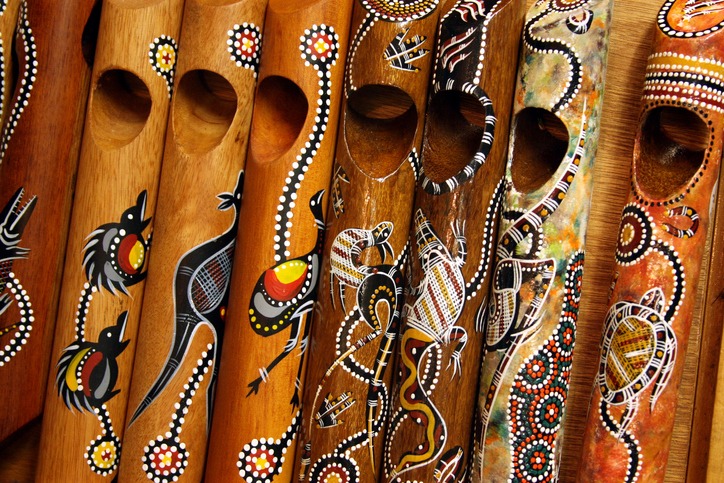 What are didgeridoos made of?

Traditionally, didgeridoos are made of hardwoods, especially the various eucalyptus trees endemic to northern and central Australia. Usually, the main trunk is used to make a didgeridoo, although a substantial branch may also be used. Traditional didgeridoo makers especially look for trees that have been hollowed out by termites. The hollowed part created by the termites is what gives the didgeridoo its distinctive “whirring” sound.

Modern and non-traditional didgeridoos can be made of other types of wood and other materials such as glass, fiberglass, clay, resin, metal, PVC piping, and carbon fiber. 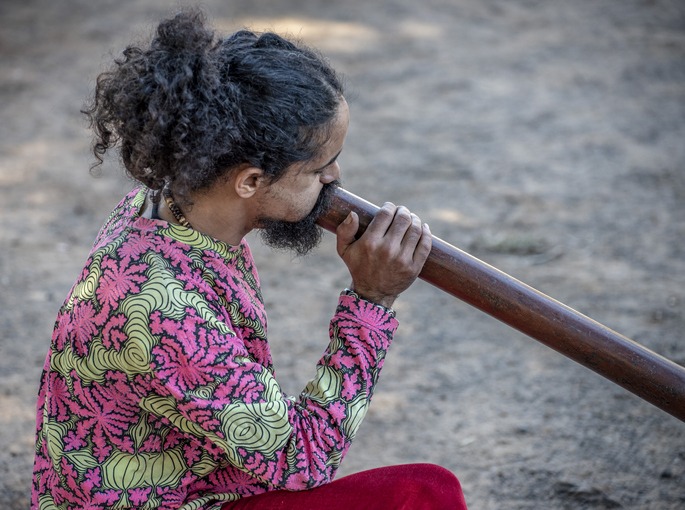 How to play the didgeridoo?

To play the didgeridoo, the musician must develop a vibrating sound of the lips to produce the basic drone sound.

Advanced and experienced didgeridoo players use a technique called circular breathing, in which one breathes in through the nose while blowing the air out of the mouth at the same time. The correct usage of this skill enables the musician to play a note continuously as long as desired.

Didgeridoo called by other names

“Didgeridoo” is not a native name, as there are other local names for it among the Aboriginal groups of northern Australia. None of these names closely resembles the word “didgeridoo.”

The table above shows only a few common regional names for the didgeridoo. But in fact, there are at least 45 names for the instrument. As you may have noticed, a few suggest its original construction of bamboo, such as bambu and paampu. 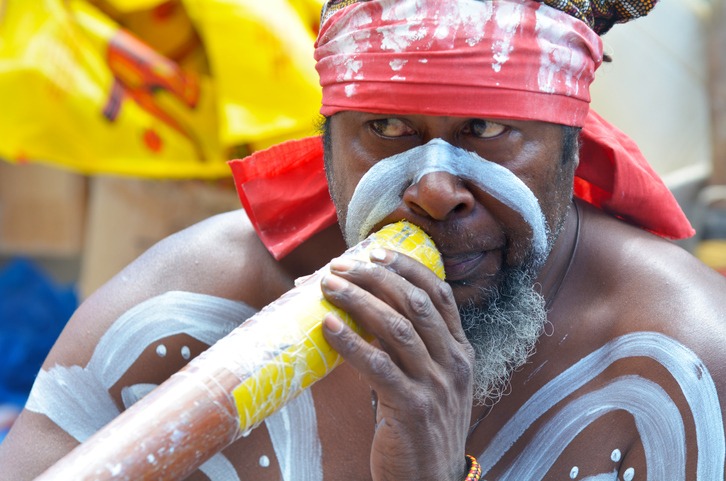 Health benefits of playing the didgeridoo

Apparently, playing the didgeridoo is good for your health physically, emotionally, and mentally.

Playing the didgeridoo strengthens the muscles in the upper airway of the respiratory system, therefore reducing the tendency to collapse during sleep, helping reduce sleep apnea and snoring. Several studies conclude that regular didgeridoo playing is a recommended alternative treatment well accepted by patients with obstructive sleep apnea.

Playing the didgeridoo can do wonders for asthmatic people, too, helping them control their symptoms and improving their quality of life.

Playing the instrument promotes deep breathing and puts one into a more relaxed state of mind. People who have heard the droning sounds of the didgeridoo find it calming and meditative. Playing it for a significant period can even put you in a trance-like state, feeling relaxed yet quite aware, and relaxed yet energized. So, it’s safe to say that hearing the sounds of the didgeridoo or playing the instrument itself can help reduce stress levels, leading to a peaceful state of mind and an elevated mood. It’s mental and emotional therapy.

The didgeridoo may be a curious instrument to the unfamiliar, but it’s commonly associated with indigenous Australian music. Whether the reason is to challenge yourself by playing a new instrument, discover more about Aboriginal Australian culture, or even improve your health and general well-being, the didgeridoo fits the bill.

If you want to know more about Australian music, discover the most famous bands and musical acts from Perth.