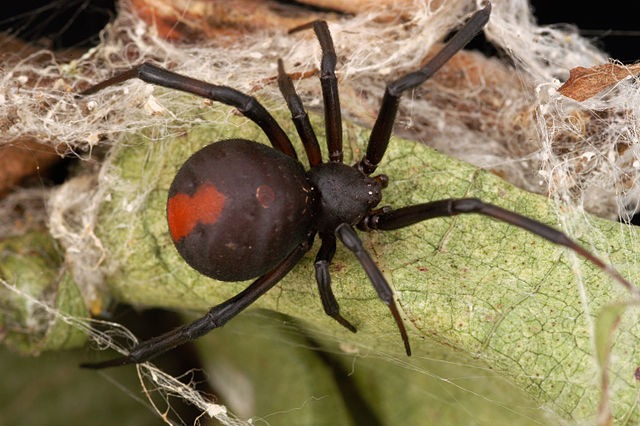 Australia is renowned internationally for its venomous spiders. From the world’s allegedly most dangerous spider the Sydney Funnel-Web, to the utterly creepy Australian Tarantula and many more. While most of the thousands of spider species living in this country are perfectly harmless there are some that are poisonous. And in the case of funnel-webs and red back spiders, even lethal.

The good news for Perth Arachnophobes is that you won’t find funnel-webs in this part of southern land. However, red back spiders are an all-too-common sight. Since 1979, there has only been one fatality from a spider bite. The bad news is, the spider in question was a red back.

On average, two thousand patients are hospitalized from red back spider bites every year in Australia. So recognizing this spider and minimizing risk is critical. Only the female red back bites.

While red backs are the only lethal spider you’ll find in Perth, there’s several other spiders to be wary of, and it’s likely that most Perth residents have had a shock from these crawlies. However, while they certainly look like the stuff of nightmares and they do have a painful bite, they are deemed low-risk.

If you’re finding a lot of spiders in or around your home, it’s worth keeping in mind that they may not be your only pest problem. Spiders’ main diet is other insects!

Spiders tend to have a very bad reputation. But they also play an important role in keeping harmful insects such as mosquitos at bay. Spiders are nature’s pest control.

House spiders are common pests that can be found across most properties in Perth.

Here are some common house spiders in Perth that are seen in homes and businesses.

Red back spiders are commonly found in urban areas, often in dry, sheltered places such as garden sheds, mailboxes and even under toilet seats!

Black house spiders are dark, robust and timid spiders. While bites from them are infrequent, their bites may be quite painful and cause local swelling.

They have a dark appearance with black legs and a dark brown back and abdomen. The female black house spider is identifiable by being larger than the male. These spiders mostly inhabit buildings, window corners, rock walls and tree trunks 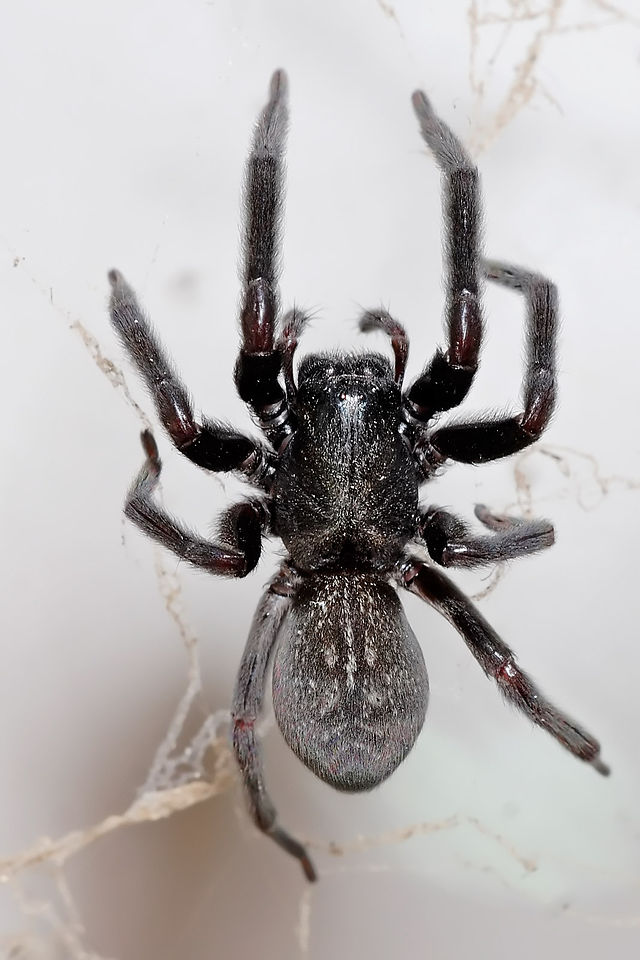 Whitetail spiders are incredibly dangerous, as their bite can cause severe skin ulceration in humans.

They have a dark grey, cigar-shaped body and dark brown legs. They are often identified by the two faint white spots on their grey abdomen and the white spot on their lower back.

Whitetail spiders are vagrant hunters that can be found beneath bark, rocks, bush shrub and houses. 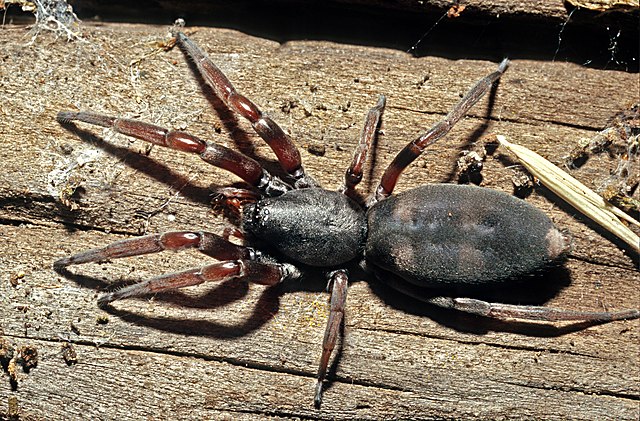 These spiders are often found living under loose bark on trees, in crevices on rock walls and in logs and under rocks. Even though huntsman spiders look scary, they are not considered to be dangerous spiders, as they are more likely to run away than bite a human. 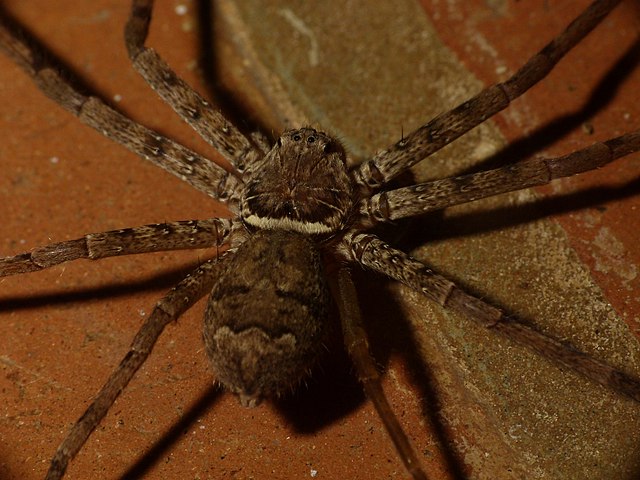 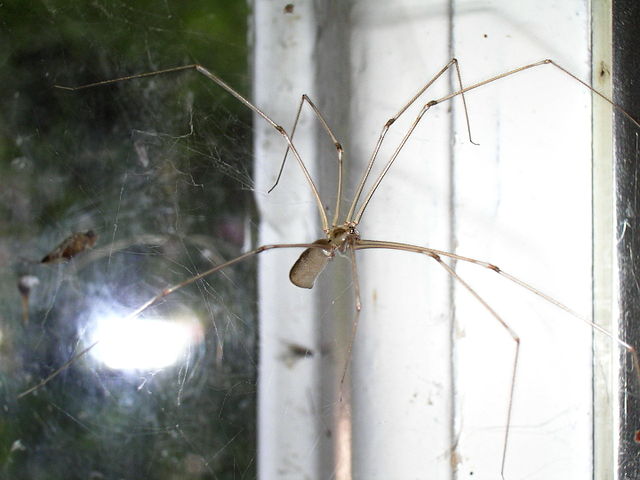 These Cellar spiders are skinny, light brown in color and equipped with long legs. These decorate the homes with their chaotic webs.

Their slim build is a huge advantage to them. These spiders enter through doors and windows of the home. The young ones are so small that, they can pass through screens and climb through the window rail. Corners are their favorite spot. They build their nests and hang in there for the prey to trying to pass through and get stuck on the web. 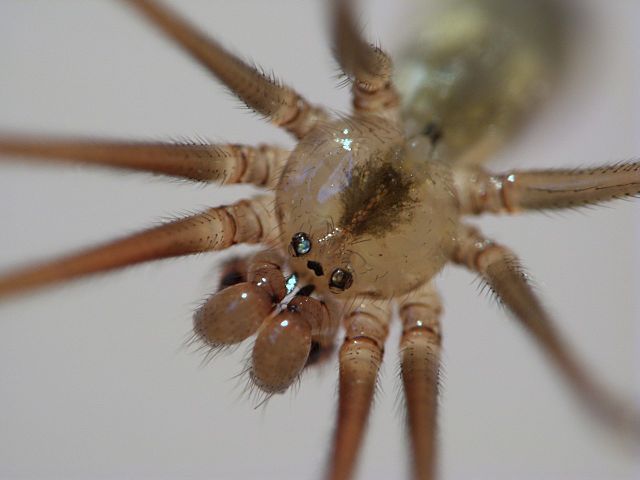 The infamous Black Widows are shiny black. One unmistakable sign is to look for red hourglass on its abdomen. The black widow spider prefers to construct webs in cool and dark places. There is a high chance that you will find them under or between logs, bricks, stairs, and stonework. Their webs are extremely sticky. Once the web is built, the female hides until a prey steps on its web. Once a prey steps on the web, the female comes out of the hiding and attacks the prey.

In the recent times, it is seen that these spiders are having a tough time surviving indoors, so it is evident that one will usually find it around the home, in the yard or the garden, or in short- outdoors. They are found infesting the basements and garages. It is important to be careful when there a black widow in front of you. You won’t want to mess with it because its bite can be fatal. 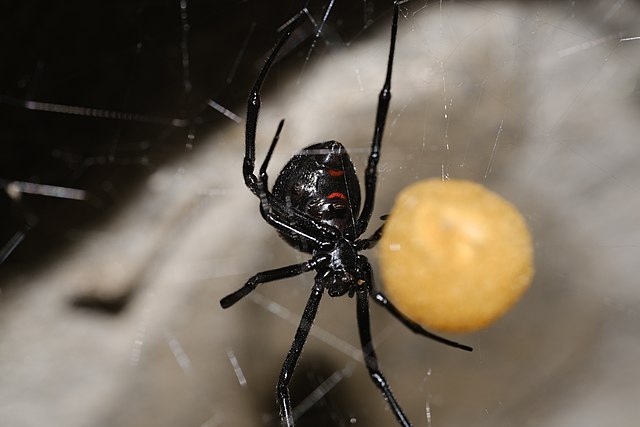 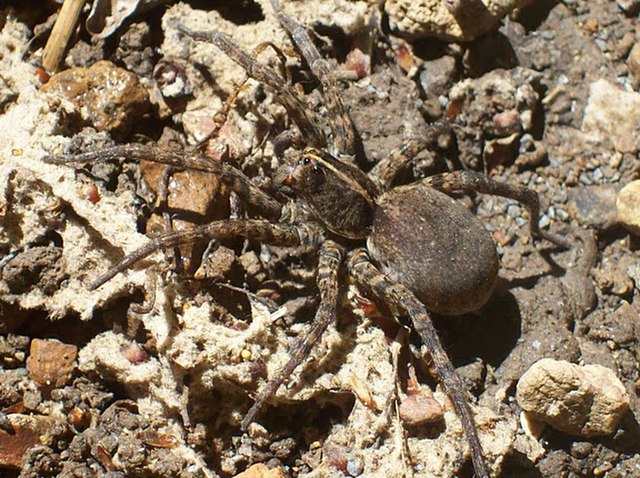 Signs of a spider infestation on a residential or commercial property can be a major cause for concern, especially when there are venomous spiders that can threaten the safety of people and pets.

The common signs of a spider infestation include:

More spiders and other insects: If more spiders appear on your property than usual, it could mean they are multiplying and hiding on the premises. An increase in spiders could also mean they are drawn to a new food source, which can often be another type of pest.

What Attracts Spiders in the House

A spider’s living conditions vary from species to species. They are often attracted to spaces that provide shelter and a close food source.

Some of the things that attract spiders inside or close to the house include:

Here is a list of the most dangerous spiders in Australian homes and how dangerous they really are.

Huntsmen are well-known all-over Australia as big, scary & hairy! But like a bad scary movie they are far more likely to just give you a scare than do any damage. While huntsman can inflict a painful bite, it is very uncommon, and they are much more likely to run away than attack.

The greatest danger from a huntsman comes from the fright and consequent fall or injury! They have been known to be the cause of car accidents when surprising an unsuspecting driving. While big and scary, huntsmen are more likely to be your friend around the house, as they will often hunt down smaller bugs.

White-tails are most commonly active at night and they like to spend time in folded fabrics so be sure to shake your towels and sheets before using them! If you do get bit by a white-tail, you should apply an icepack and contact the Poisons Info Hotline (13 11 26) for further assistance.

Red backs are found all through-out Australia and love to find little nooks and crannies in urban environments. They like to hang around garden sheds, mailboxes and infamously they enjoyed hiding under your toilet seat.

While there has only been one reported fatality from a red back spider in the last 70 years it is estimated that there are 2000 red back bites every year. The bite is extremely painful and may result in nausea or headaches, but many times the red back’s fangs are too small to penetrate your skin. While these little fellas may look unassuming be sure to steer clear of them.

You might have heard someone say, “are daddy long legs dangerous”? While there is an urban legend that the daddy-long legs would be the most venomous spider in the world if only it’s fangs could penetrate our skin, this is 100% false. Daddy long legs are of no more danger than a common house fly.

They like to string up their webs in sheltered areas, often around human habitations like houses, garages or sheds. They are likely to keep your house more pest-free as they hunt other insects and spiders. They have even been known to hunt red-backs.

By far and away the most dangerous spider in Australia, the Funnel-web is far more common than we would like.  They are equipped which huge fangs (bigger than a brown snake!) and enough venom to kill an adult human. No fatalities have been recorded since 1981.

The funnel web likes to burrow in humid, sheltered places. They sometimes wander into residential areas and have been known to hide out in shoes or fall into swimming pools. Also known to be extremely aggressive, you should exercise extreme caution around them. They will more likely attack than run-away. 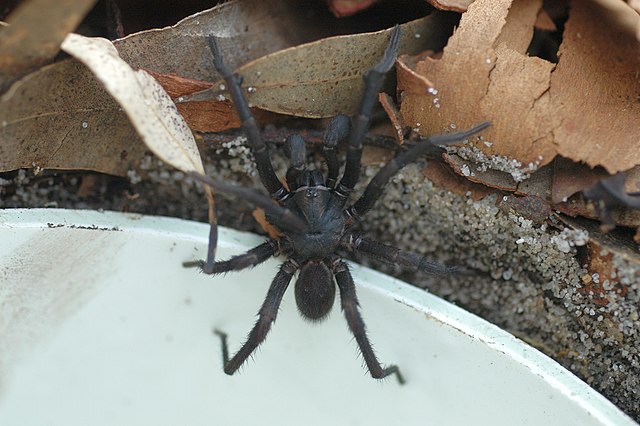 One of the most common spiders on this list, the garden orb-weaver (and other orb-weaver varieties like the golden orb-weaver pictured above) are commonplace in Australian backyards. They are most active at night and like to weave long webs between trees-hedges or washing lines.

While their venom is mostly harmless, they can give a nasty sting and they are very aggressive. Out of anything on this list they have the most reported bites each year. Along with a nasty bite, their huge webs can deliver a big surprise and could lead to an injury from the subsequent panic.

Of the six most dangerous spiders in whole of Australia, it is good to note that at least only four of these are found in Perth.  The Huntsman spider, White tail spider, Red back spider and Daddy long legs.

By taking some precautionary measures such as checking first before reaching into your mailbox, shaking any items you’ve left outside, and wearing gloves and shoes while gardening. You can reduce your chance of a spider bite – and by seeking medical attention if a bite occurs, you can generally prevent damage.

More often than not spiders are not a huge danger in everyday lives. The most dangerous spiders in Australian homes can become a serious issue when left unchecked.

The best time to treat spiders is in Spring. Have a professional come and do a routine spider pest control inspection or treatment to control and keep away unwanted house spiders.